All Leaders branches (including our call center) will be closed Monday, Oct. 10 in observation of Columbus Day. 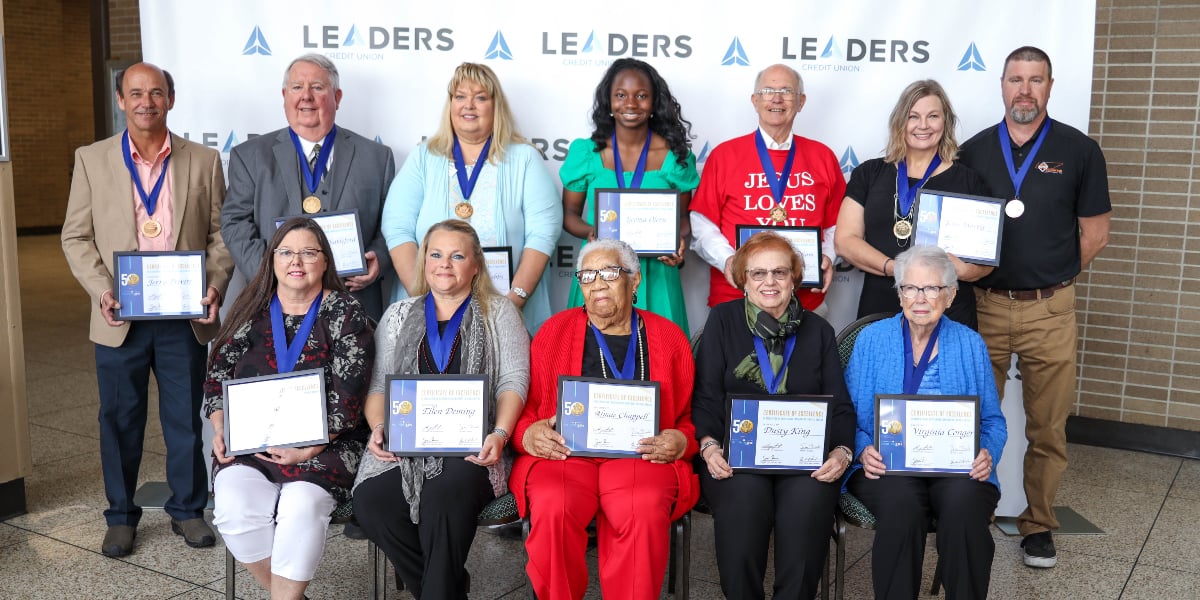 Award recipients are volunteers and champions for numerous charities and causes across West Tennessee, including youth mentorships, community events, elderly service, homeless service, animal rescue, emergency response, and beyond. A video package for each recipient can be viewed by visiting the WBBJ-TV website.

“At Leaders, we are honored to champion our own community heroes and are been blessed to hear each genuine story and witness their passion of how they advocate for positive change,” said Todd Swims, President and CEO of Leaders Credit Union. “Along with WBBJ, we are honored we’ve had the opportunity to shed light on community members who help us move forward and make lives better.”

Jerry Privitt of Humboldt, Tenn., was selected as the West Tenn. national nominee for the Jacqueline Kennedy Onassis Award representing the greatest possible service to a local community by a private citizen. The national Jefferson Awards event will occur in June, presented in Indianapolis, Indiana.

Privitt is the co-founder and chief of the Humboldt Area Rescue Squad, a volunteer emergency rescue team dedicated to the Humboldt Community. Privitt began the Rescue Squad over thirty years ago and has devoted his time and livelihood as the first responder to thousands of calls for assistance.

“Multiplying Good is very honored to partner with Leaders Credit Union and WBBJ-TV to bring the awards to the West Tennessee community and to celebrate the accomplishments and service of local neighbors,” said Brady Tanner, Senior Director, Recognition Programs at Multiplying Good. “We are excited for this year’s national nominee and look forward to celebrating Jaunita through our national event.”

If you would like to nominate a champion in your community, visit leaderscu.com or www.wbbjtv.com and follow the prompts.

For the fifth year, Leaders Credit Union has partnered with WBBJ-TV to bring Multiplying Good’s...

Leaders Credit Union, a member-owned financial cooperative based in Jackson, Tenn., announces its...

Leaders Credit Union Gives Over $5,000 Towards 5th Annual 'From Leaders with Love' Projects This Christmas

Throughout December, Leaders carried out twelve projects and gave approximately $5,000 towards...